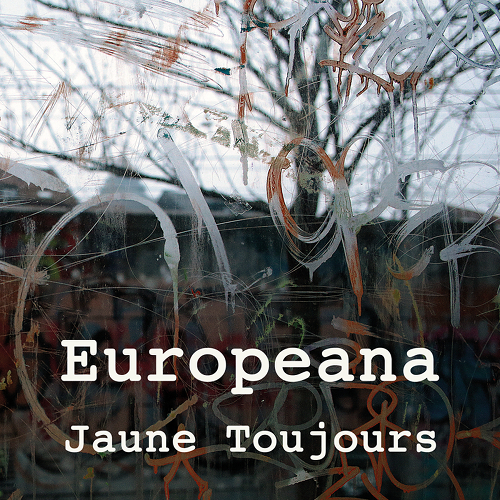 Europeana was produced with live sessions at the Brussels alternative club Magasin 4, recordings at Studio Choux de Bruxelles (rehearsal room of Jaune Toujours) and overdubs at Strawberry Lab (home studio of sound engineer Christine Verschorren), where the album was also mixed. With guests: the backing vocals of Burkinese talent Patrick Kabré, the likembe of Jo Zanders (Lkmtiv, Velotronix, Drom), the trombone of Vincent Heirman (Bravo Big Band, Superska) and the trumpet of the Belgo-Syrian Yamen Martini.

The title for the album finds its origins – next to many possible other links and actual connotations - in some tours of the band in Canada. The audience there (often 2nd, 3rd or 4th generation of European migrants) described the music of Jaune Toujours as both familiar (the sounds and instruments of “the old continent”) and exotic (a very own, contemporay mix, distilled from all sorts of influences). Since it is difficult to classify Jaune Toujours, why not come up with a new musical term? Europeana it is therefore; analogue to or in opposition to the musical style Americana.

Music critic Philippe De Cleen (Written in Music): “Jaune Toujours, strongly rooted in the metropolis of Brussels, seizes the socio-political actuality and embodies a thoroughly realistic but critical view on it. It is to their credit that their social commitment also provides good, pleasing and highly accessible music.The band – a real party at live concerts – delivers a fantastic and convincing stew of genres, motifs and musical styles: a hodgepodge of rock, jazz, punk,ska, afro, dub, reggae, soul and roots, mixed up by the unique Jaune Toujours blender.”

“While many are often a mere copy of other bands, that’s definitely not the case for Jaune Toujours.They are different through their refreshing attitude and approach, with songs alternating from English (End Of Season) to French (Même Pas Peur) and even Dutch (Alles Normaal). It’s hard to find another band whose musical palette is so diverse, with, among others, ska (Ska-Man), oriental drift and derailing (Balkan Khan) and funky jazz (Funky Brussels).

“Jaune Toujours deals in the most diverse tunes. The band distinguishes itself with its social message, experienced through life: just listen how the opening track Save Le Monde immediately catches the attention and takes you on to the advenurous roads of Europeana. The way the band puts the most diverse topics to music: traffic problems in Veiculo Longo, the end of summer in End Of Season or the malaise in news and media in Radio Blues. At the same time, Jaune Toujours embodies an energetic, uplifting sound which is fully present on the new album. And the band still calls things as they are: the subject of human rights is combatively raised (Refugees Welcome) and the political system is being questioned thoroughly (Cinema Politika, Funky Brussels). More than once we are reminded of sources of inspiration such as The Clash or Manu Chao. This is no coincidence,
because the shared ideology, socially critical approach and musical background is always recognizable as Jaune Toujours blasts from your speakers. Open your ears wide and be amazed by one of the most festive funky live bands in our little country called Belgium, habibi!”