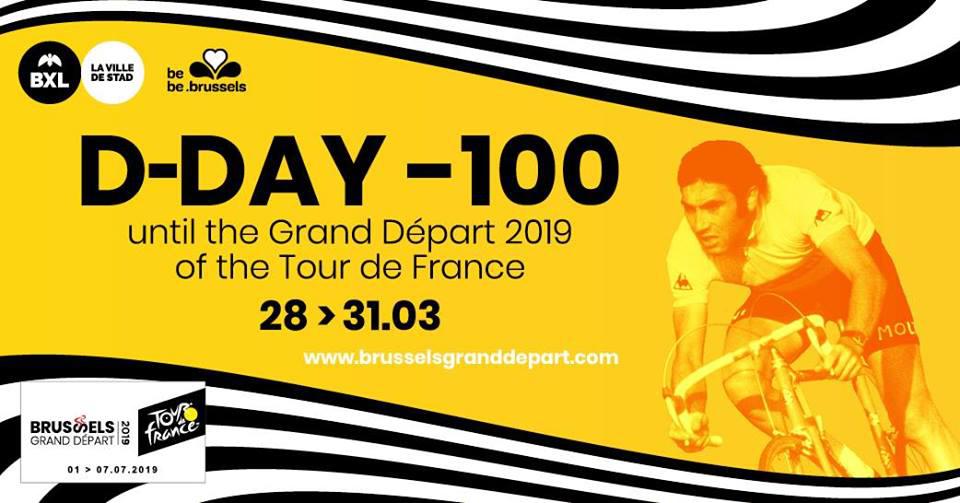 To celebrate not only racing but also everyday cycling, a host of sporting, cultural, artistic and educational activities and events will be organised over the 100-day run-up to the Grand Départ in various parts of Brussels.
Our great capital will be decked out in Tour colours to celebrate this huge popular event!

The run-up to 6 July, date of the first stage of the Tour de France, kicks off on 28 March. Several symbolic moments will highlight this important day to which the general public has been invited to mark the start of the countdown. Eddy Merckx, Christian Prudhomme and several other champions having donned the Yellow Jersey will be participating in several events.

Inauguration of the Square Eddy Merckx

At 12.30 pm, the Place des Bouvreuils, in the Chant d’Oiseau neighbourhood of Woluwe-Saint-Pierre, will be renamed “Square Eddy Merckx”.

This green, peaceful neighbourhood was where the great cyclist spent his childhood, from 1945 to 1973.

Eddy was given his first bike at the age of four and bought his first racing bike at 11. Jules, his father and first fan, ran a grocery shop, for which the young Merckx handled deliveries on his bike after school for pocket money, building up some muscle in the process. Locals nicknamed him “Eddy Tour de France”.

Exactly 50 years ago in 1969, Eddy Merckx won the Yellow Jersey for the first time in Woluwe-Saint-Pierre!

A reproduction of the “Tribute to Eddy Merckx” by Belgian artist Stefaan De Croock, will be placed on a stele in blue stone. “The Cannibal” won 525 races, with the corresponding trophies being concealed in this work. Cobble stones ringing the stele have been engraved with the list.

From 2.00 and 6.00 pm, the vintage cars will be exhibited on Place des Palais like a Guard of Honour. Then at 7.30 pm they will head for the central boulevards to give a splendid vintage touch to Place De Brouckère.

This moment heralds the start for Place De Brouckère as the scene of festivities on a cycling theme, celebrating sport and sharing with a concert, events for the young and young-at-heart, tight-rope walking, food bikes etc. This friendly “opening” ceremony will be attended by members of local cycling associations, their friends and families.

At 7.15 pm, a festive procession will leave from Grand-Place and head for Place De Brouckère.

At 7.30 pm, the “100 days” run-up to the Tour de France will be officially celebrated with a symbolic moment attended by Christian Prudhomme, Eddy Merckx and other great champions in Belgian cycling. Emotions are bound to run high!

Exhibitions of the Tour de France

Also on 28 March, two official exhibitions on the Tour de France will be inaugurated in Brussels. These modern, interactive exhibitions take visitors on a ride through the history of the Grande Boucle, reliving the exploits of our champion Eddy Merckx and admiring the many collection items on display.

True to Tour spirit, both special exhibitions will be admission free.

Opening times to be communicated at a later date.

Le Tour, l’expo – 28 March to 14 July 2019
This itinerant exhibition is updated yearly, retracing the history of the third biggest sporting event worldwide with short texts, pictures and emblematic footage, examining various themes and harnessing interactivity with the introduction of a touch table.

In French, with translations in Dutch and English.
Venue : RWDM stadium (rue Charles Malis 61, 1080 Molenbeek-Saint-Jean), a stone’s throw from the actual starting point for the first stage of the Tour de France (06.07).

This year is the Yellow Jersey’s centenary! This exhibition pays tribute to the 15,059 racers having participated in the Tour and the 3,228 “Giants”.

Launch of a commemorative coin
On March, 28th, the Royal Mint of Belgium and the Royal Dutch Mint will officially launch the new Belgian 2,5 euro “Brussels Grand Départ 2019”. This coin is especially struck in honor of this amazing event and is packed in a ‘’sportive looking’’ coincard, with the official logos of the Tour de France and the Grand Départ 2019 and is a legal tender in Belgium. The coin will be available at www.herdenkingsmunten.be from the 28th of March.